SIP Specifications | Standard Details | Enter your email address for access to our Technical Downloads, We will use it for marketing purposes for Sip Build UK and not pass on to any third party or ever sell your personal information. 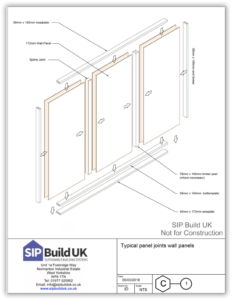 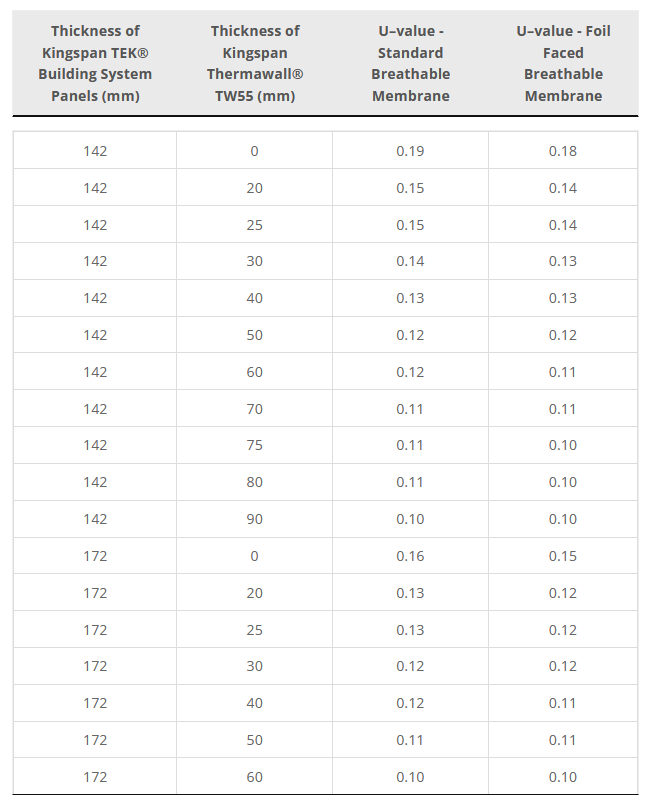 The λ–values and R–values detailed below are quoted in accordance with BS EN 13165: 2008

Kingspan TEK® by SBUK SIP panels have a thermal resistance (R–value) of 5.100 m2.K/W (142 mm thick panels) or 6.405 m2.K/W (172 mm thick panels). It is calculated by dividing the thickness of each component by its thermal conductivity and adding the resultant figures together. The resulting number is rounded down to the nearest 0.05 (m2.K/W).

In addition to the excellent U–values that can be achieved by walls and roofs constructed using the, Kingspan TEK® by SBUK SIP panels the closed cell structure of the rigid urethane insulation core of the panels does not allow movement of air within them. The insulation will not sag or physically deteriorate over time, as may be the case with other insulating materials. Air leakage levels can be as good as 0.08 air changes per hour at normal pressures (approximately 1 m3/hour/m2 at 50 Pa). Standard results would be 3 air changes per hour. This is subject to the quality of the overall build.

Kingspan TEK® by SBUK SIP panels are faced on both sides with a maximum of 15 mm OSB/3, autohesively bonded to the rigid thermoset urethane insulation core during manufacture. This allows for a substantially greater pull out strength by upto 50% than a comparable 11mm OSB board. (Autohesion is the spontaneous boding or adherence between two unvulcanised surfaces of an elastomer).

Kingspan TEK® by SBUK SIP panels are available in the following standard size(s):

ALL PROJECTS ARE CUT BESPOKE TO SUIT YOUR DESIGN.

The BBA certificate and our BOPAS accreditation both say the system is good for a Minimum of 60 years!!!

Resistance to Solvents, Fungai and Rodents

The rigid urethane insulation core is resistant to dilute acids, alkalis, mineral oil and petrol. It is not resistant to some solvent–based adhesive systems, particularly those containing methyl ethyl ketone. Adhesives containing such solvents should not be used in association with Kingspan TEK® by SBUK Building System. Kingspan TEK® Building System components, which have been in contact with harsh solvents, petrol, mineral oil or acids, or components that have been damaged in any way should not be used. The rigid urethane insulation core and facings used in the manufacture of Kingspan TEK® by SBUK SIP panels resist attack by mould and microbial growth and do not provide any food value to vermin.

The permissible vertical load resistance for Kingspan TEK® by SBUK SIP panels is sufficient for the System’s use as loadbearing partitions, separating walls, the inner leaf of external walls and pitched roofs in dwellings up to four storeys high.

The Kingspan TEK® by SBUK Building System in the construction specified in the table below, when subjected to BS EN 1365-1: 2012 (Fire resistance tests for loadbearing elements. Walls), has achieved the result shown 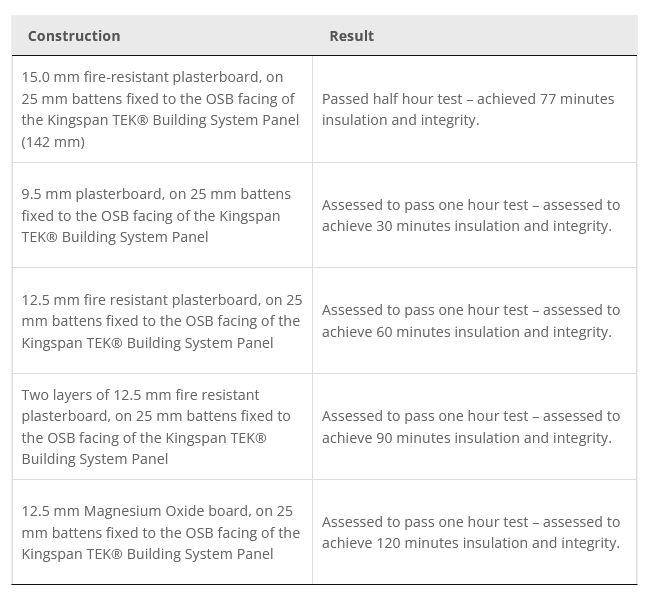 NB: The result shown can also be applied to the Kingspan TEK® Building System in a 172 mm thickness

SIPs For Self Build Homes

We love the sense of volume the Dutch barn roof adds to this completed project in Oxon. Self Build ...

Great to see the passion for building systems that are sustainable being recognized! Well done to ev...

We create beautiful SIP Build UK homes throughout the UK, suiting each individual taste and budget. ...

Always great to see a project nearing completion. Self Build in Sherburn in Elmet utilising the 142m...

Dude, Where's my par? 72 holes in just one day! Our very own Estimating Manager Josh and teammates a...

We've been shortlisted in the #MMC category of the Constructing Excellence Yorkshire and Humber Awar...

We made it! What a great time we had on Tuesday celebrating our 10th Anniversary. Thanks to everyone...

Thermal Performance Doesn't Have To Be Hard. Call our team today for expert advice. https://t.co/e...

New homes and buildings in England will have to produce 31% less CO2 under new rules announced by th...

Did you know a 172mm SIP panel achieves a U value of 0.15 without the need for additional insulation...